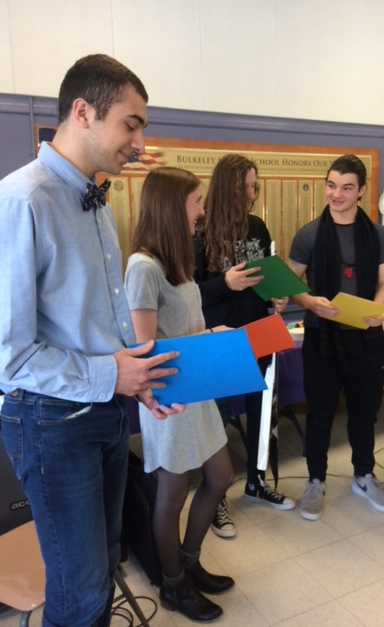 The opinions of students at our school often feel muffled or misconstrued. It’s difficult for us to talk about things openly. But the English department has given senior students the opportunity to share their passions and thoughts on any subjects they want.

For the second year in a row, Rhinebeck seniors had the opportunity to develop a Passion Project in their English classes this year. This project, as the name suggests, is about letting students read, write, and develop a speech that pertains to something they are passionate about. It lets the students share with their peers and be excited about their work.

The Hawk Talks brought all the seniors together the morning of Jan.25th in the BMS cafe to share coffee and pastries and to listen to the each of the winning presentations.

After researching and “entering a conversation” with scholars and experts in their field, the students then presented their projects in their classes. Their peers picked which ones they thought were the best. The students who were deemed to have the best projects in each class then had the opportunity to present their Passion Projects at the Hawk Talks on January 25th. These winners received a generous $100 gift card courtesy off the Rhinebeck PTSO.

The first student to present was Jack Dykeman whose project was about STEM in Rhinebeck.

He opened with talking about how he had the opportunity to go to RPI for a summer camp, which offered over 50 STEM classes. He then explained that he was disappointed to see how little STEM-related electives we have at our school. In a survey of seniors, he found that 77% of students would like more STEM classes. He also expressed ways to fit these new classes into our schedules, including a review of RHS’s graduation requirements.

He ended in a powerful way by saying “The humanities help you describe the world, STEM helps you explain it.”

The second student to present was Will Lange, and it was no surprise to anyone that his project was on guitar. He described different parts of his equipment and their effects. He also explained how his guitar was custom built in Rhinebeck, and how he was able to choose each part himself.

Once he was finished speaking, he ended his presentation by playing a song on his guitar, prefacing it with a clincher statement: “Nothing says nine in the morning like electric guitar.”

The next person to speak was Raph O’Connor with his presentation on rites of passage.  With a nod to Freud and several non-western cultures with special rituals to mark passage into adulthood, Raph took us on a journey of self exploration and questioned what it is that makes us officially “adult” individuals.