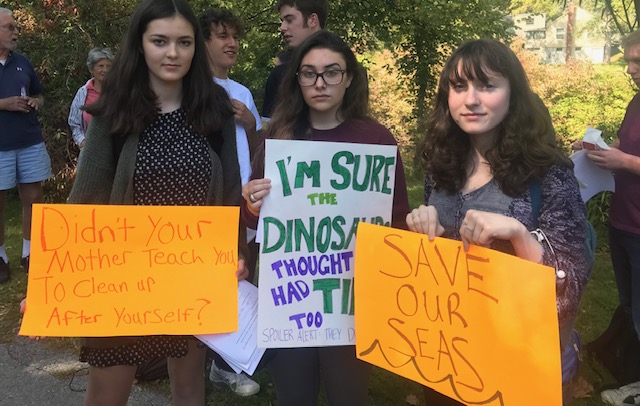 Peaceful protest is built into our country’s foundation. We see time after time through history the positive outcomes of these protests, whether the activists walked out or sat in. These people weren’t afraid of doing these things since they knew that in order to cause change, you sometimes have to break the rules.

So what effect does civil disobedience have with no rule breaking or no consequence for the righteously disobedient?

Over the past two years at Rhinebeck, we have had three walkouts.
The kick off to these events was a participation in The March for Our Lives protest was run by the student council. This walkout was prefaced with an assembly and an option to participate in the walkout. The student council had to fight very hard to get this approved and to let students be able to participate in a nation-wide protest against gun violence.

The second Rhinebeck walkout occurred on March 22, 2019, when our students pushed for the Green New Deal, a proposed United States legislation that aims to address climate change and economic inequality. This walkout was not affiliated with the school\; students simply walked out of school before the ninth period.
Well, simply is not the word I would use for this. In reality, it was utter chaos in the lobby. Many kids, to avoid getting in trouble with the school, got their parents to write a note dismissing them from school before ninth period.

The Greeter’s desk turned into a breeding ground for kids trying to get around punishment.

In some cases, they stayed calling parents and trying to get permission and missed half of the protest.

This was no different with our most recent walkout. The third walkout, held on September 20, 2019, included a march to town and a petition to sign. On that same day in New York City, public schools allowed students to join protests without punishment and over 250,000 students participated.

Some students seem to want to disobey without consequence. They are trying to have the best of both worlds.

The aftermath for our students who were not officially signed out was a decision: They could opt for sitting in detention, or for writing a letter to our congressman pushing for action to be taken on the topic they were standing up for.

In turn, almost every student chose to write a letter. Dr. Davenport’s decision allowed for a large number of letters to be written and created a positive outcome from the walkout —–potentially the change they are looking for in their government. The administration is clearly not against us.

Climate change is a real and very important issue. So stand up for what you believe in. If you’re concerned that your parents may take away your Xbox if you do so, then you need to consider the importance of your own protest.