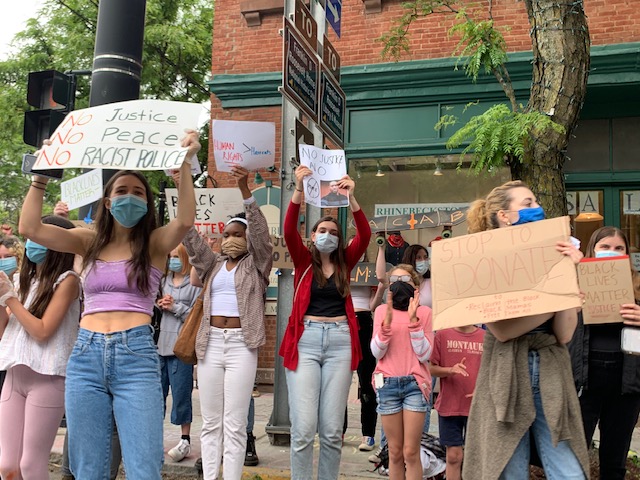 Local students occupied the corners of Rhinebeck for around 2 hours.

Due to the overwhelming news on police brutality and the widely publicized death of George Floyd, the Black Lives Matter movement has been at the forefront of social media and discussions.

The Black Lives Matter movement began in 2013 after police officer George Zimmerman was acquitted of murder in the death of unarmed teenager Trayvon Martin. Since then, the movement has become widely celebrated and recognized.

On Tuesday, June 2nd, family and community members who organized a peaceful march in Floyd’s hometown of Houston, TX, warned outside groups who have instigated violence to stay away as they memorialized Mr. Floyd

On the same day in our town, almost two hundred local high school, middle school, and college students chalked the streets of Rhinebeck with the names of police brutality victims. Chalk4change, a mid-Hudson resistance group, along with other youth members in our community helped to organize the protest.

Chalk4change already organized a previous protest on May 31st in the streets of Red Hook. Their goal is to peacefully promote the Black Lives Matter movement and allow small towns to participate in the fight for racial justice.

In the center of Rhinebeck, the streets and nearby parking lots were filled with the names of African Americans who lost their lives due to police brutality.

After chalking the town, students occupied the main intersection chanting and collecting donations from cars that passed by.

Today, Chalk4chnage raised $915 for a number of organizations, including Black Mamas Bail Out, Reclaim the Block, and other important organizations.

If you would like to donate, please take some time to click on the linked the organizations  below:

-I run with Maud: https://www.gofundme.com/f/i-run-with-maud

Organizations in Kingston to donate to: