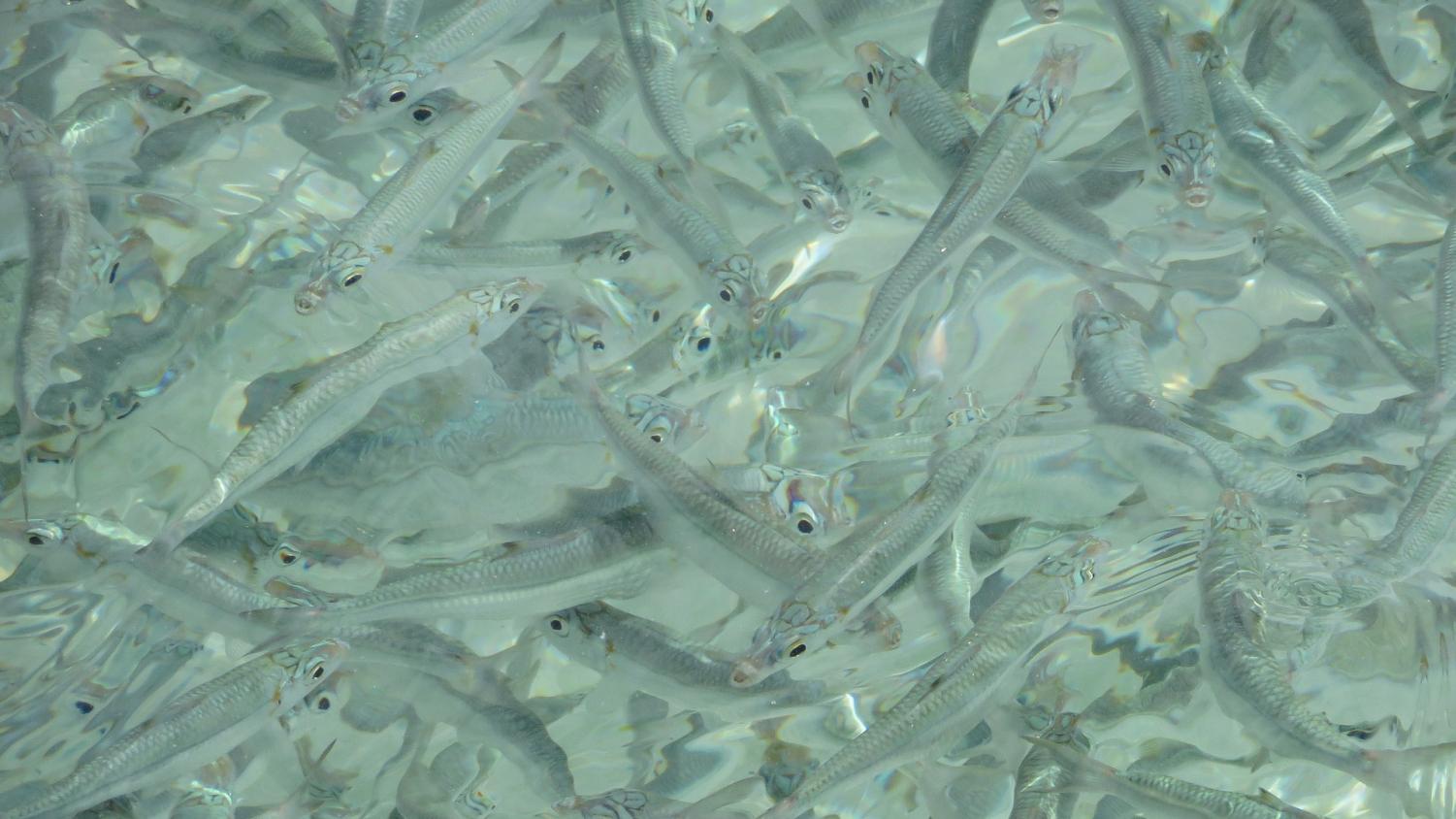 A sea of people. You never really think about the phrase, I guess. At least, I don’t. Or didn’t, not until now.

In biology last year, we learned that certain species of fish swim in schools. From a distance, a school of fish looks like a silver-blue ball, rolling through the sun-scattered, turquoise waves. But if you squint, look closer, you can make out thin lines in the mass of glinting gray, lines that mark the individual forms of sleek fish. These fish have evolved to have a shape that allows them to hang together in this mass. Their streamlined form – narrow at the ends, wide in the middle – lets them simultaneously cut through the water like a laser through butter and fit together, one on top of the next, like a puzzle.

But unlike puzzle pieces, the fish don’t stay in one place. They move. They swim. They rotate.

Imagine you are a finger-length, bug-eyed fish. You’re hovering, treading water in the middle of the mass, surrounded by your kin –  your cobalt-scaled sister fish whom you envy just a little but love nonetheless, your wide-lipped grandma fish who, between tales of close encounters with World War II torpedoes, puffs on a captain’s pipe and exhales bubbles with a deep sigh. Of course, you want what’s best for your sister and your grandma. You don’t want them to be eaten by the sharp-toothed, skeletal fish who has just emerged from a darker depth. But, then again, you would not like to be eaten either. You want your family to survive. You want to survive. What’s the best way to tip the odds in your and your family’s favor?

Suddenly, you’ve cracked it. You know exactly what to do. And it might be the dumbest or the smartest idea you’ve ever had. You cut around Uncle Larry, trace a path out, away from the guarded middle of the pack, and make your way out to the frays of the group. And there, as that skeletal fish nears you, gets close enough for you to smell its sushi breath, to see every razored row of teeth that line its bloody maw – there in the most vulnerable position possible, there you linger. You wait.

But only for a second. Then you dart away, back to the middle of the pack. Turns out you were a pretty stupid fish. Not because you put yourself in that defenseless position. But because you didn’t realize that everyone else was already doing this.

Every few seconds, the throng of fish in the middle of the school moves outward, assuming vulnerability to protect their family members at the core of the pack. And a few seconds later, the fish switch places again, distributing equal vulnerability to every family member, giving them the greatest net chance of preserving at least a fraction of their DNA. Evolution.

This lesson, this evolutionary feat masterminded by a little fish, this is what I recall as I look out from the New York City sidewalk. The edges of the gray strip of concrete swell with Sierra Mist bottles, plastic bags, even the shattered remains of a Google Glass eyepiece dropped by a briefcased businessman in a rush. People – a mass of gray coats, black umbrellas, indistinguishable from a distance – people rush toward the bus door as it exhales a guttural hiss, a dying breath, and pops open.

When I saw the crowd, the indistinguishable mass, the constant movement, the monochrome gray reminded me of a school of fish. For an instant, I thought I understood the phrase a sea of people, even thought cheekily to myself that the expression should instead be a school of people.

But then I squinted, looked closer.

In the crowd, an old woman with a pinched face, a hooked nose swung her leather pocketbook into the chest of a young man and elbowed her way in front of him. Fortunately, the young man was too busy shouting into his iPhone to notice. Neither did he notice that his polished oxford had landed heavily on the mary jane of a little girl, a little girl who had just snatched a candy bar from a little boy who I hope was her brother. Distracted by the searing pain of having her foot trampled by a grown man, the girl dropped the candy bar, which tumbled through the slit in a sewer grate.

In this instance, I realized this throng of New Yorkers was nothing like the school of fish. In that school of fish – that genius invention crafted by nature, by evolution, by progress – in that school of fish, every fish protected another. They looked out for each other. But in this barren cityscape, every person who walks the streets, boards the bus, pretends to be part of a unified, enlightened society, every person is looking out for themselves. And themselves alone.

In terms of generosity – of unity – a small congregation of fish deep in the ocean has defeated mankind.

But, in the end, mankind will always win out. Why? Not because we’re kinder, smarter, better adapted. But because the plastic wrapper of the candy bar that the little girl dropped splashed into the sewer water.

And that sewer water traveled through the New York water pipelines, into the Hudson River, the delta, the Atlantic, the belly of that finger-length, bugged-eyed little fish, that fish who outsmarted its predator, saved its family. That fish who survived in a way evolution had prepared it to survive. But died, alongside its grandma, its sister, its species, at the mercy of a candy wrapper.

As I squeezed through the bus door, a door whose metal scraps would one day kill the skeletal, predatory fish who had once threatened our hero, I made up my mind: a sea of people is too generous an expression. We don’t deserve to be compared to anything as beautiful, as essential, as the sea. Maybe a better expression would be a pile of people. Piles of people line the streets of New York.

Piles of people – like the piles of trash we’ve thrown in the gutters.

If you want a picture to show with your comment, go get a gravatar.