Rhinebeck’s Sinterklaas: “Humanity at Its Best” 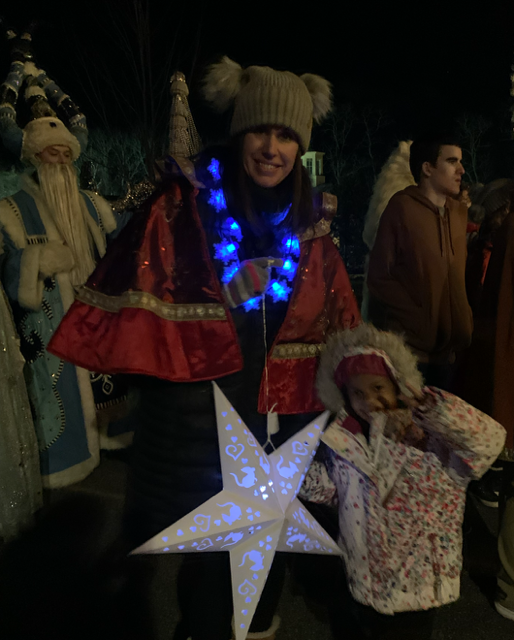 Six-year-old Tsiory Frischknecht and her mother Maureen joined in the Sinterklaas parade this year.

If you ever find yourself on the first Saturday of December with a sorely depleted holiday spirit, look no further than Rhinebeck’s annual Sinterklaas parade and festival for a day filled with whimsy, fanciful puppets, and the magic of childhood.

The Dutch tradition of Sinterklaas is a very special festival that celebrates community, joy, light, love, and holds the veneration and appreciation of children at its very core.

A program distributed at the festival describes who Sinterklaas is and what he represents: “He loves children, is generous, protects and honors the poor, brings blessings and gifts, protection, food and clothing. He comes at the darkest time to remind us of the light. He is the good king, the kind teacher; he ‘flies’ to those in need, the creatures all love him, he comes with good intent. His bag is really full of love and hope and caring…He is humanity at its best.” I think nothing quite describes this unique celebration better than “humanity at its best.” It reminds us all what is truly important and what makes the holiday season so special.

Though Rhinebeck’s celebration is rooted in Dutch tradition, the town has surely made the holiday its own. Each year those in charge of putting the celebration together choose an animal to honor. Sometimes the creature is chosen to bring awareness to a species that is endangered, while some are chosen because of their connection to the Hudson Valley, but each honored animal is chosen for a very special reason. For instance, one year the elephant was chosen as the honored animal to commemorate the almost fully intact mastodon skeleton that had been found in Hyde Park years ago.

In 2020, when the leaders of Sinterklaas were deciding on an animal to honor, they had children, the focal point of this magical celebration, in mind. They chose the frog, an animal that essentially lives two lives: one in the water as eggs and then tadpoles, and one on land as adults. They felt this transition from water to land, tadpole to adult was a fitting metaphor for the wondrous transition period between childhood and adulthood that would highlight the duality of life. However, with the onset of the Covid-19 pandemic and subsequent cancellation of the festival, Froggy had to be postponed to the next year.

But throughout the course of the pandemic, the Sinterklaas board became conflicted about their decision to honor Froggy as they found a new animal hero: the valiant mouse! It is because of these small, yet courageous creatures that we have a vaccine to protect us against illness and are able to enjoy beautiful things like the Sinterklaas parade. There is even a small note in the Sinterklaas pamphlet that reads: “Thank you to the mighty mice who have given themselves so that we might have vaccines.” While the mouse had surely proven herself to be a worthy animal to be honored, they still wanted to honor Froggy as well. So, it was decided that both Miss Mousey and Froggy should be saluted. The organizers celebrated their unity and joy by having the two animals get married at Sinterklaas!

The creators of the parade leaned into the whimsy of such a fanciful and folkloric match. On the day of the parade, in the courtyard of town, sat a cheery toadstool house covered in flowers and affectionately called “The Love Nest.” There, relatives of Miss Mousey and Froggy (Uncle Toad and Mouse Woman) sat dressed to the nines in bonnets and top hats distributing pieces of colorful ribbon. These strands of ribbon tied together represent tying the community together: two ribbons are for your parents, one is for yourself, and one is for a stranger. At the top of every hour, the doors of the “Chapel of Love” opened to anyone who wished to attend Miss Mousey and Froggy’s wedding. “Betty and the Baby Boomers” sang a folksy song about the union of Miss Mousey and Froggy and all the creatures that came along for the ceremony. Past honored animals including the monarch butterfly, the sturgeon, the bear, and the turtle came skittering, soaring, fluttering and crawling through the church to accompany Mousey and Froggy on their special day. Each animal was portrayed by a skilled actor in a tenderly crafted homemade costume. This wedding ceremony was perhaps the most memorable and cheerful I’ve ever attended and as I left the little brick church I found myself broadly beaming.

While the wedding was surely delightful to behold, there were a plethora of other activities and attractions around town that were just as captivating. For instance, a big white bear could be found throughout the day in various locations, dancing merrily with his band of friends playing jolly music for him and the people he met along the way to jig to. Not only did he serve to enliven the throngs of people on the streets, but to lead them to various attractions around the town.

For instance, at one point he led a trail of dancing, smiling people to “The Courtyard” in which a group of dancers were performing “Morris Dancing.”

One of the performers described Morris Dancing as “a very, very ancient English tradition which comes primarily from the Cotswold region of England in the vicinity of Oxford. “What’s happening here is called the Border Tradition… there are rumors that it was some sort of fertility rite… it tends to happen right in the Spring when they’re planting… it all came from these little rural villages… little farm villages would get together and they would perform their own dance,” he said.

In the bustling courtyard, the members of the Morris team performed dances consisting of rhythmic stepping and tapping of their staffs, while wearing colorful, fringed cloak-like garb.

In addition, on the vibrant streets, there was everything from a sword juggler to a lady with a coat furnished with pockets full of candy.

One very special activity that took place throughout the day was the Crowns & Branches Workshop where children would get to adorn a crown and branch with as many trinkets and treasures as possible, s that they can be recognized as the Kings and Queens of the day. There was no shortage of decorations; there were tables upon tables and bins upon bins of buttons, lace, shells, beads, bottlecaps, glitter,and string that had been donated for the workshop.

Though the day of Sinterklaas was brimming with enchanting festivities, the focal point of the celebration was the parade which started around six o’ clock. The parade featured a congregation of fanciful and vibrant puppets crafted mostly by celebration artist Jeanne Fleming. The procession was led by Sinterklaas himself adorned in rich crimson robes and accompanied by his trusty white horse who bends down to gently nuzzle the children who line the streets. Close behind him were the seven sisters constellation puppets (delicately streaming illuminated stars with faces in them), which helped light the way for Sinterklaas. Sinterklaas and his companions were trailed by the night’s guests of honor: Miss Mousey and Mr. Froggy dressed in their ravishing wedding outfits. The rest of the parade consisted of ingeniously crafted dancing bumble bees, fire breathing dragons, fluttering butterflies, soaring geese, and twirling ballerinas.

The parade was a wondrous sight to behold, yet the most special part of Rhinebeck’s Sinterklaas celebration was yet to come. After the parade,all the spectators gathered in the municipal parking lot for a cherished ceremony. Parents gathered in a circle around the children with star lanterns in hand and bowed down to the little ones while slowly raising their illuminated Sinterklaas stars up to them.

This culminating ceremony cements what Sinterklaas is all about: light, love, community, and most importantly children.